When you take a moment to reflect on the history of product development at Monsanto, what do you find? Here are twelve products that Monsanto has brought to market. See if you can spot the pattern…

Did you know Monsanto got started because of artificial sweetener? John Francisco Queeny founded Monsanto Chemical Works in St. Louis, Missouri with the goal of producing saccharin for Coca-Cola. In stark contrast to its sweet beginnings, multiple studies have shown that saccharin causes cancer in test rats and mice. Meanwhile six human studies, including one done by the National Cancer Institute, showed that consuming artificial sweeteners such as saccharin and cyclamate resulted in bladder cancer. Better living does not always come through chemicals…

During the early 1920s, Monsanto began expanding their chemical production into polychlorinated biphenyls (PCBs) to produce coolant fluids for electrical transformers, capacitors, and electric motors. Thirty years later, toxicity tests began reporting serious health affects from PCBs, including organ damage in every laboratory rat exposed to the chemical, with death occurring in 1 out of 2. Monsanto insisted the studies were all flawed, had the scientists’ reputations called into question, and kept on making the stuff.

After another THREE decades of studies, the truth could no longer be contained: the U.S. Environmental Protection Agency (EPA) published a report citing PCBs as the cause of cancer in animals, with additional evidence that they can cause cancer in humans. Additional peer-reviewed health studies showed a causal link between exposure to PCBs and non-Hodgkin Lymphoma, a frequently fatal form of cancer. In 1979,  the United States Congress recognized PCBs as a significant environmental toxin and persistent organic pollutant. and banned its production in the U.S. By then Monsanto already had manufacturing plants abroad, so they weren’t entirely stopped until the Stockholm Convention on Persistent Organic Pollutants banned PCBs globally in 2001.

And that’s when Monsanto’s duplicity was uncovered: internal company memos from the mid 1960s surfaced, proving that Monsanto had known about dangers of PCBs from early on.

In 2003, Monsanto paid out over $600 million to residents of Anniston, Alabama, who experienced severe health problems including liver disease, neurological disorders and cancer after being exposed to PCBs — more than double the payoff that was awarded in the case against Pacific Gas & Electric made famous by the movie “Erin Brockovich.”

And yet the damage persists: nearly 30 years after PCBs have been banned from the U.S., they are still showing up in the blood of pregnant women, as reported in a 2011 study by the University of California San Francisco.

In 1941, Monsanto began focusing on plastics and synthetic polystyrene, which is still widely used in food packaging and ranked 5th in the EPA’s 1980s listing of chemicals whose production generates the most total hazardous waste.

Monsanto ran the research laboratory and test site for the Manhattan Project during the early 1940s, resulting in the development of the first nuclear weapons, as well as the deadliest industrial accident in U.S. history.

In 1944, Monsanto became one of the first manufacturers of the insecticide DDT to combat malaria-transmitting mosquitoes. Despite decades of Monsanto propaganda insisting that DDT was safe, the true effects of DDT’s toxicity were at last confirmed through outside research and in 1972, DDT was banned throughout the U.S.

In 1945, Monsanto began promoting the use of chemical pesticides in agriculture with the manufacture of the herbicide 2,4,5-T (one of the precursors to Agent Orange), containing dioxin. Dioxins are a group of chemically-related compounds that since become known as one of the “Dirty Dozen” — persistent environmental pollutants that accumulate in the food chain, mainly in the fatty tissue of animals. In the decades since it was first developed, Monsanto has been accused of covering up or failing to report dioxin contamination in a wide range of its products.

During the early 1960s, Monsanto was one of the two primary manufacturers of Agent Orange, an herbicide / defoliant used for chemical warfare during the Vietnam War. Monsanto’s formula had dioxin levels many times higher than the Agent Orange produced by Dow Chemicals, the other manufacturer. As a result of the use of Agent Orange, Vietnam estimates that over 400,000 people were killed or maimed, 500,000 children were born with birth defects, and up to 1 million people were disabled or suffered from health problems—not to mention the far-reaching impact it had on the health of over 3 million American troops and their offspring.

Internal Monsanto memos show that Monsanto knew of the problems of dioxin contamination of Agent Orange when it sold it to the U.S. government for use in Vietnam. Despite the widespread health impact, Monsanto and Dow were allowed to appeal for and receive financial protection from the U.S. government against veterans seeking compensation for their exposure to Agent Orange.

In 1955, Monsanto began manufacturing petroleum-based fertilizer after purchasing a major oil refinery. Petroleum-based fertilizers can kill beneficial soil micro-organisms, sterilizing the soil and creating a dependence, like an addiction, to the synthetic replacements. Not the best addiction to have, considering the rising cost and dwindling supply of oil…

During the early 1970s, Monsanto founded their Agricultural Chemicals division with a focus on herbicides, and one herbicide in particular:, RoundUp (glyphosate). Because of its ability to eradicate weeds literally overnight, RoundUp was quickly adopted by farmers. Its use increased even more when Monsanto introduced “RoundUp Ready” (glyphosate-resistant) crops, enabling farmers to saturate the entire field with weedkiller without killing the crops.

While glyphosate has been approved by regulatory bodies worldwide and is widely used, concerns about its effects on humans and the environment persist. RoundUp has been found in samples of groundwater, soil, streams and air throughout the Midwest U.S., and increasingly in food. It has been linked to decreasing bee populations, butterfly mortality, and the proliferation of superweeds. Studies in rats have shown consistently negative health impacts ranging from tumors, altered organ function, and infertility, to cancer and premature death. Reference the above “GMO Risks” page which includes countless references to support these statements.

An accidental discovery during research on gastrointestinal hormones resulted in a uniquely sweet chemical: aspartame. During the clinical trials conducted on 7 infant monkeys as part of aspartame’s application for FDA approval, 1 monkey died and 5 other monkeys had grand mal seizures—yet somehow aspartame was still approved by the FDA in 1974. In 1985, Monsanto acquired the company responsible for aspartame’s manufacture (G.D. Searle) and began marketing the product as NutraSweet. Twenty years later, the U.S. Department of Health and Human Services released a report listing 94 health issues caused by aspartame. (Watch a quick video here.) 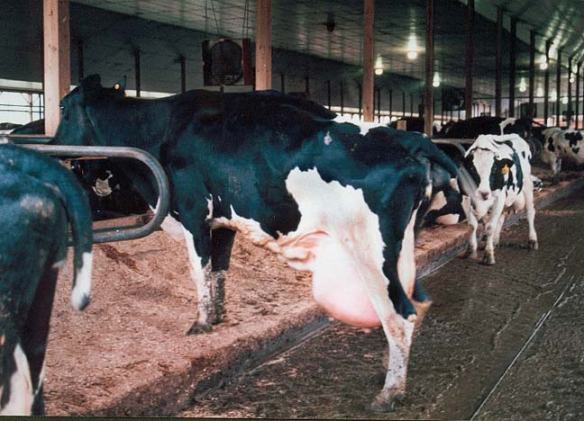 This genetically modified hormone was developed by Monsanto to be injected into dairy cows to produce more milk. Cows subjected to rBGH suffer excruciating pain due to swollen udders and mastitis, and the pus from the resulting infection enters the milk supply requiring the use of additional antibiotics. rBGH milk has been linked to breast cancer, colon cancer, and prostate cancer in humans.

In the early 1990s, Monsanto began gene-splicing corn, cotton, soy, and canola with DNA from a foreign source to achieve one of two traits: an internally-generated pesticide, or an internal resistance to Monsanto’s weedkiller RoundUp. Despite decades of promises that genetically engineered crops would feed the world with more nutrients, drought resistance, or yield, the majority of Monsanto’s GMO crops do one thing: sell more Monsanto’s RoundUp—an ever-rising profit as weeds continue to evolve with RoundUp resistance.

Most sobering however, is that the world is once again buying into Monsanto’s “safe” claims.

Just like the early days of PCBs, DDT, Agent Orange, Monsanto has successfully fooled the general public and regulatory agencies into believing that RoundUp, and the genetically modified crops that help sell RoundUp, are “safe.”

Except Monsanto has learned a thing or two in the past 100+ years of defending its dirty products: these days, when a new study proving the negative health or environmental impacts of GMOs emerges, Monsanto attacks the study and its scientist(s) by flooding the media with counter claims from “independent” organizations, scientists, industry associations, blogs, sponsored social media, and articles by “private” public relations firms—all founded, funded and maintained by Monsanto. Unfortunately, few of us take the time to trace the members, founders, and relationships of these seemingly valid sources back to their little Monsanto secret.

Fooling the FDA required a slightly different approach: click on the below chart to see how many former Monsanto VPs and legal counsel are now holding positions with the FDA. And don’t forget Clarence Thomas, former Monsanto attorney who is now a Supreme Court Justice, ruling in favor of Monsanto in every case brought before him. 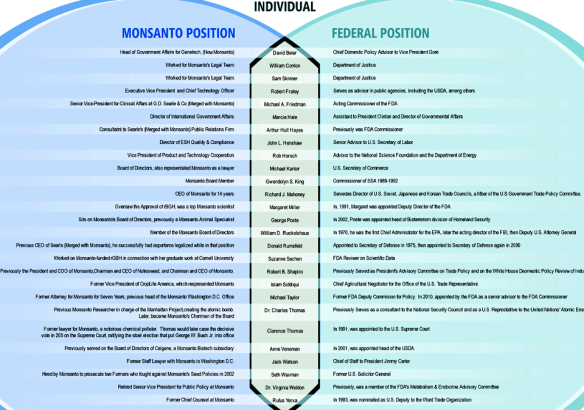 Monsanto’s latest technology produces sterile grains unable to germinate, forcing farmers to buy seeds from Monsanto year after year, rather than save and reuse the seeds from their harvest as they’ve been doing throughout centuries. To make matters worse, terminators can cross-pollinate and contaminate local non-sterile crops, which endanger the future seed supply, and thus ensures eventual control of the world’s food supply by Monsanto and the GM industry.

The result? More than 85% of the processed food you consume every day has Monsanto GMOs inside, and residues of their RoundUp pesticide outside. But it’s not just processed food—fresh fruit and vegetables are next: genetically engineered sweet corn is already being sold at your local grocer, with apples and a host of other “natural” produce currently in field trials.

How is it that Monsanto is allowed to manipulate our food after such a dark product history? How is it they are allowed to cause such detrimental impact to our environment and our health?

According to the Organic Consumers Association, “There is a direct correlation between our genetically engineered food supply and the $2 trillion the U.S. spends annually on medical care, namely an epidemic of diet-related chronic diseases.

Monsanto’s history reflects a consistent pattern of toxic chemicals, lawsuits, and manipulated science. Is this the kind of company we want controlling our world’s food supply?

Freedom exist within the time of Creation